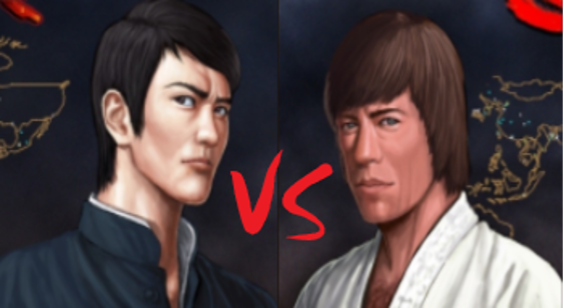 There’s a reason why so many people are confused about the answer to these questions. The simple answer is that there isn’t a clear best martial art for everyone.

Different martial arts teach different skills, which can be more or less useful depending on your goals. That’s why it’s important to recognise the differences between martial arts.

Thousands of people worldwide train in Karate and Kung Fu, and they are often the two most popular martial arts to study.

Whilst Karate and Kung Fu are very different styles of martial arts, they also have many similarities.

Below we answer the question ‘What is the difference between Karate and Kung Fu?’ and explain some of the benefits of each style.

What Is Kung Fu?

Kung Fu history is rich and complicated, as is anything with thousands of years in the making.

The words Kung Fu are in fact a term that translates as ‘acquiring great skill through effort, or ‘success achieved through hard work’ and is used in Chinese culture to explain any type of skill or technique learned through consistent practise and dedication, so this does not always describe a style of martial arts in particular.

Therefore, as the meaning of Kung Fu translates to “work” or “success” it resulted in “Kung Fu” having various interpretations.

Usually, though, the term refers to an achievement that was gained through expending a great deal of energy and time, and was also used to define the process of training mind and body, and perfecting one’s abilities.

When Kung Fu became popular across the world as a practice for self-defence, the term was adopted by western society to classify many forms of Chinese Martial Arts, for example, Shaolin Kung Fu, Wing Chun and Tai Chi.

Each of these styles has its own ideologies, principles and techniques, unique to its style.

Generally, the movements of Kung Fu are often circular in nature and flow seamlessly from one technique to the next.

Many styles of Kung Fu such as Tai Chi are designed to wait for the opponent to initiate an attack, redirecting their advance before following up with strikes or takedowns when a superior position is gained.

This is in direct contrast to some styles of Karate, which prefer to push the attack, moving forward with linear strikes.

This is not a hard and fast rule of course as there are many different variations of each art, but with years of practice sparring with opponents from both Kung Fu and Karate, I have found Karate to be more aggressive in nature, with Kung Fu being a more defensive art.

Kung Fu can be more effective in situations where it is best not to initiate the attack, especially if the fight moves to close quarters, where you find yourself wrestling with your opponent.

By adopting a circular motion to yield to an aggressive assault, Kung Fu likewise offers a fluid and stylish approach, so it is often referred to as a “soft” style of martial art.

When compared to Kung Fu, Karate describes one specific kind of fighting style.

Karate first originated in Japan and was established through the indigenous style of Ryukyuan martial arts.

Ryukyuan fighting styles were influenced by the Fujian White Crane style of Kung Fu and were formally introduced to Japan in the very early 20th century, at a time in which the Ryukyu Kingdom was annexed by Japan.

As a matter of fact, the translation of ”Karate” literally means “Chinese Hand,” confirming that the system was a fighting style derived from Chinese Martial Arts.

Gichin Funakoshi, known as the founder of Shotokan Karate, is typically recognised as the individual that introduced and promoted Karate in Japan.

Karate in modern times can be viewed as an art form, a system of self-defence, or a sporting activity.

As a basis, there are three main kinds of training in Karate, including ‘kihon’ which translates as basics, ‘kata’ which means forms, and ‘kumite’, referring to sparring.

The art is usually more linear in its approach, so many of the techniques propel the practitioner forward, which builds momentum towards the target. The system of Karate is often an offensive fighting style and is more focused on initiating the attack than responding to the opponents advance.

One thing that can be said of almost any martial art is that they offer many psychological and physical benefits, and help with forging a strong mind and body.

As well as instilling traits of self-control, discipline and focus, martial arts can help to build confidence, while additionally supplying a range of useful self-defence techniques.

In conclusion, Karate and Kung Fu are both martial arts that have been practised for hundreds, and in some cases, thousands of years.

Both of these martial arts started out as a method of self-defence and evolved in modern times to facilitate their participation in sporting events.

Karate is a harder and more linear martial art that focuses on strikes using hands and feet.

Kung Fu is a softer and more circular martial art and offers a complete training system, including kicks, punches, throws and joint locks, as well as internal energy generation training, to increase power for striking, and to protect the body from injury.

Both of these martial arts are great for practical self-defence as well as for fitness and health.

If you want to learn more about Kung Fu training and the health benefits of martial arts, check out Wu Xing Dao Kung Fu. At Wu Xing Dao Kung Fu, we are keeping the spirit and traditions of this amazing Martial Art alive, and sharing the training methods with the next generation of Kung Fu practitioners.